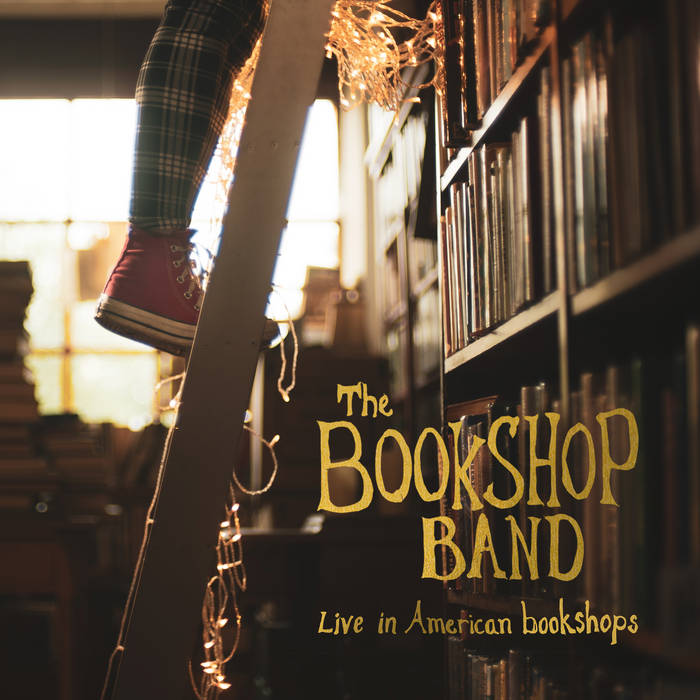 stuart wright saw this band live not knowing what to expect and was seriously impressed - they were better than the main act! So here they are live again.
It's "different" but with bags of musicality and skill, and it's even cool to read a book while you listen!
Er, that's it... Favorite track: Once Upon A Time.

In late 2018 The New York Times laid down a challenge. “If America’s independent booksellers can’t figure a way to get The Bookshop Band to tour America, they’re doing something wrong.” This LIVE album follows the band on their debut tour of American bookshops. Compiled chronologically from their performances it captures the ambience of the bookshops and introduces the books that have inspired the songs.
The full tour story can be found at www.thebookshopband.co.uk/blog

THANK YOU
To Gardners and All Media Supply (AMS) for sponsoring the tour - especially to Nigel Wyman, Russ Morgan, Christine Cawley, Aidan Lunn, Nikki Daigneault and Kerry McCarthy.
This recording was made possible by a grant from Creative Scotland. The tour itself was sponsored by Gardners and AMS / All Media Supply. Our invitation to the US came from the American Booksellers’ Association - thank you especially to Oren Teicher
and Joy Dallanegra-Sanger. The record’s manufacturing was made possible thanks to all the kind fans who supported our Kickstarter campaign. Nic Bottomley & Mr B’s Emporium of Reading Delights for the Maria’s leg, and continually curating our reading. To “on the ground managers” Hugh Elliot and Mark Griffith. Alison De Frees who went above and beyond, United Airlines for being on time, Kip, Martin Tompkins, Joseph Chupek, Owen Lewis, Kate Jacobs, Megan and Ben, Caroline Waterlow, Tim Porter and all our families who have been so supportive. To all the bookshops, libraries and venues on the tour - Four Way Books, Little City Books, Short Stories, Turn
of the Corkscrew, The New York Public Library, Book Culture, Maria’s Bookshop, Bookworks, Title Wave Books, OpCit Sante Fe, OpCit Taos, Collected Works, SOMOS, Denver Public Library, Heart Fire Books, Boulder Books, Second Star To The Right, Tattered Cover and WORD. A huge thank you to all the US booksellers who hosted us and our concerts, and to their wonderful staff who not only looked after us but also often after Molly, who also deserves a huge shout out for being such a trooper.
Thank you to all the people who wrote letters supporting our visa application: Stuart Kelly, Amanda Foreman, Robert Macfarlane, Emma Hooper, Max Porter, Eliza Carthy, Adrian Turpin, Joanne Harris, Louis de Bernières, Rosamund de la Hey, Jo Frost, Fred and Kathy Powell, William Rycroft, Sam Sweeney, Patrick Gale, Nicholas Hooper, Helen Gush, Dennis Johnson, Claire Armistead and Sarah Jones. And especially to Dwight Garner for laying the challenge to get us over to the US in the first place.
Thank you to all the authors for the books that have inspired us and to all the audiences who braved the weather, came and took a punt on something weird happening in a bookshop. Hats off to you all.

PHOTO & ARTWORK CREDITS
We‘re indebted to Jared Cocken who took photos in Manhattan and at the New York Public Library, and to Rachael Rodgers who took photos at Title Wave Books (Albuquerque), OpCit (Sante Fe) and Collected Works (Sante Fe), as well as the back cover photo. Britt Margit Hopkins took shots at Second Star To The Right (Denver)