Accidents and Pretty Girls (or How Not To Woo A Woman) 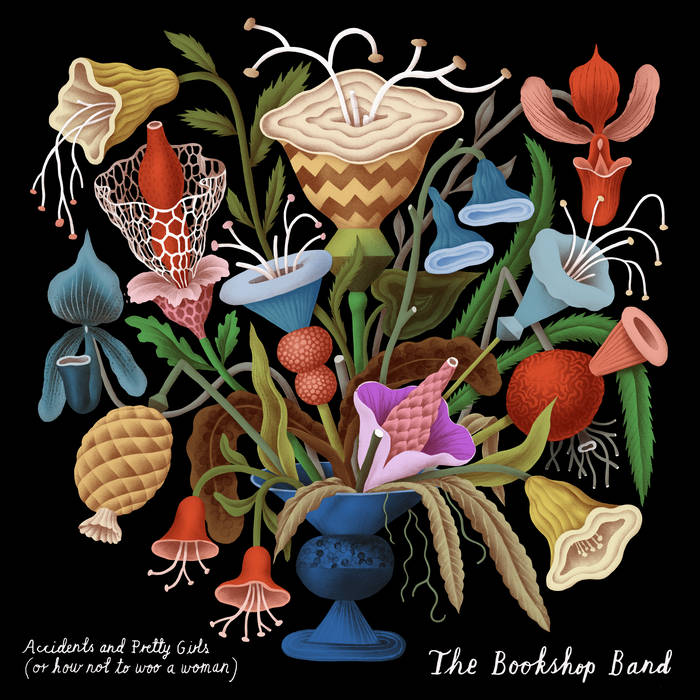 An album of literary wooing - some successful, many less so, featuring the band’s responses to The Unlikely Pilgrimage Of Harold Fry (Rachel Joyce - bells, reads), The Horologicon (Mark Forsyth - harmonica, vocals, commentary), The Teleportation Accident (Ned Beauman), The Crane Wife (Patrick Ness), A Day In The Life Of A Smiling Woman (Margaret Drabble), Bring Up The Bodies (Hilary Mantel as well as As You Like It, Much Ado About Nothing, and Twelfth Night (William Shakespeare).

All tracks written and produced by The Bookshop Band. The extract from The Unlikely Pilgrimage of Harold Fry appears on track 12 courtesy of the author. Tracks 1, 2, 3, 5, 9 and 10 recorded at Realworld Studios. Tracks 4, 6 and 11 recorded at home, track 7 recorded at Christchurch (Rode), track 8 recorded at Ashley Manor. Extra recording at Rachel Joyce’s house, Mark Forsyth’s house, The Open Book (Wigtown), Jools’ house, Emma Hooper’s house, Caroline’s bathroom, Pete’s house. All tracks mixed by Ben Please, except track 1 and 2 by Marco Migliari, and track 4 which was mixed by Richard Evans at The Labour Exchange (Bath). All engineered by Ben Please, except track 4 with James King. String arrangements by Beth Porter and Ben Please.
Mastered by Marco Migliari
Artwork by Bjorn Lie (www.bjornlie.com)
Case design by Ben Please
Cases printed and cut by Opal Print, inserts by Richard Lawrence, disks by Key Production.
Those who directly helped with the recording include Marco Migliari, Mark Forsyth, Rachel Joyce, all the musicians who played with us, Brauner microphones and Louis Austin, Microtech Gefell GmbH microphones and Sound Link Pro Audio, Grace Designs, Leigh Haggerwood, James King, Richard Evans, Will Cookson, Steve Belgrave, Mike Hillier, Stuart Bruce, Chris Hughes and Ashley Manor, Universal Audio, UA Digital and Source Distribution, Realworld Studios, The Wigtown Book Festival and The Open Book, Nigel and Jackie at Rave Box Studios, Owen Benson, Anna Botterell and Andrew Hooker Violins, Keith Lunt and co. at Opal Print and Richard Lawrence, Vivi Tobies & Paul Walton. Big thank you also to Caroline Waterlow and Ashley Harrow.
Thank you to all our Patreon supporters, past and present, including James Patterson and Alan Squire Publishing, and our song sponsors (see tracks for details). Special thank you to Bjorn Lie for producing a beautiful piece of art for the album.
Thank you to Nic and Juliette Bottomley and ALL the staff at Mr B’s Emporium of Reading Delights in Bath for curating our reading.
And an enormous flood of gratitude to all the wonderful authors and bookshops who have inspired the songs on this album. Thank you.